Kurt Arnold is one of the most recognized and successful trial lawyers in the country. He has achieved more thus far in his career than most attorneys will ever accomplish, and he shows no signs of stopping. His advocacy has resulted in billions in life-changing compensation for the injured and wronged, with more than a billion recovered in a single year multiple times. Kurt is driven to secure the best outcome for every client he represents, and these results are proof of his commitment—and skill.

Kurt is constantly setting state and national records for his fearless representation of clients in some of the most notable cases our country has ever seen. Take the $117 million recovery that set the record for the highest single-plaintiff personal injury verdict in Louisiana, the $44 million recovery that marked the largest single amputee verdict in the nation, and the $42 million recovery that set the record for Hawaii’s largest commercial verdict. He also recently obtained $193 million for two people hurt offshore, as well as $139 million for a case involving an onshore explosion.

His track record is a testament to his ability and unwavering drive to help others:

Recognized by His Peers & Awarded for His Results

Kurt has been recognized numerous times by the National Law Journal, for his record-setting verdicts and when Arnold & Itkin was named to the Top 50 Elite Trial Lawyers list in the U.S. The Best Lawyers in America® recognized Kurt’s exemplary work in both Admiralty and Maritime Law as well as Personal Injury Litigation – Plaintiffs. Lawdragon also recognized Kurt, as one of the 500 Leading Plaintiff Consumer Lawyers and the 500 Leading Lawyers in America.

In 2019, Kurt received the honor of joining the Inner Circle of Advocates. This esteemed invitation-only group is comprised of the top 100 plaintiff lawyers in the U.S.

Making a Name for Himself Since an Early Age

Kurt was only 19 years old when he graduated from the University of Texas with High Honors. He graduated in the top 5% of his class from the University of Texas Law School with Honors 3 years later and established Arnold & Itkin when he was just 25 years old. Kurt has consistently achieved higher settlements and verdicts than other attorneys his age ever since he started practicing law.

Today, Kurt is recognized as one of the nation’s top trial attorneys. He is licensed to practice in Texas and Pennsylvania, before the U.S. Supreme Court, and before the Fifth Circuit Court of Appeals.

Kurt has made a name for himself in the complex field of maritime law. He is the attorney that more workers from the Deepwater Horizon chose to represent their interests after the explosion that claimed 11 of their co-workers and injured dozens of others. He was chosen by families who lost loved ones in the tragic El Faro sinking. In both of these incidents, he was able to secure life-changing recoveries for his clients. In fact, his work resulted in the highest settlements in the country. His understanding of maritime law and every complex matter that affects offshore workers and seamen continues to lead to exceptional results in this field.

A tireless advocate for workers in the most hazardous industries, Kurt has represented workers and families who have suffered unthinkable injuries and losses in plant explosions, worksite accidents, land rig accidents, and industrial disasters. The results? Numerous settlements and verdicts in excess of $100 million for these clients. A recent case involved a plant explosion in Louisiana that left dozens of people seriously injured. The defendants refused to negotiate a fair settlement with Kurt and his clients prior to trial, so Kurt argued two cases in front of juries, back-to-back, ultimately winning multiple eight-figure verdicts for his clients. The defendants thought twice before facing him in court again, offering settlements that were ten times the amount they had offered prior to trial.

Kurt is a firm believer in holding negligent corporations accountable for putting profits over the well-being of innocent people. He has fought for thousands of clients who were injured or lost loved ones because of the negligence and wrongdoing of trucking companies, pharmaceutical giants, manufacturers, and distributors. His wins have included several recoveries of over $100 million, earning him recognition by peers as the top catastrophic personal injury trial lawyer. Hundreds of attorneys have turned to Kurt to try their most challenging cases.

Dedicated to Family & His Community

Kurt lives in Houston with his wife and fellow attorney, Tara, along with their son Jaxon and daughter Isla. He and Tara are members of St. Paul’s Methodist Church and are active in their community. They are founders of the Arnold & Itkin Foundation, which is proud to support numerous charities.

Kurt fights every day to help good people going through the worst times of their lives. He takes great pride in what he and his firm have accomplished thus far and is always fighting to build a better future for all workers, consumers, and families across the country.

“Always bet on justice. It takes a lot of time and resources to win a case against big defendants, and some cases are easier to win than others. But this doesn’t matter at Arnold & Itkin. We take the cases that we must win because it’s the right thing, the ones we have to win—even if it’s hard. Especially if it’s hard.”

Get to know Attorney Kurt Arnold, one of the founding partners of Arnold & Itkin. 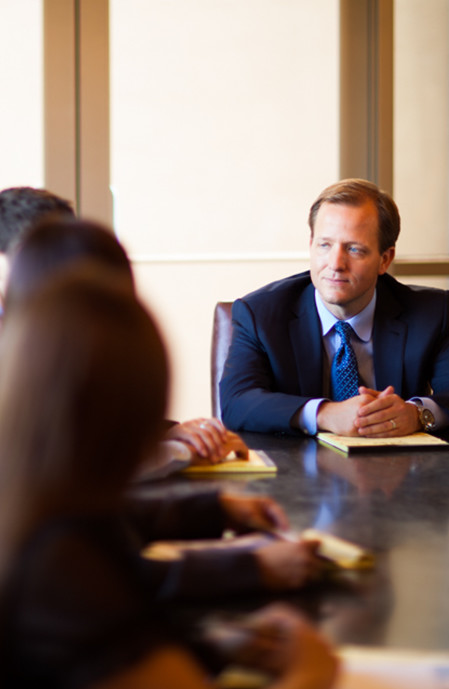